From summit to sea part 1

Firstly before anyone accuses me of plagiarism the title of this blog was based on a microadventure described in Alastair Humphreys’ book…… (I love his book!!)

One of the highest hills beyond Hythe is Summerhouse hill – at 148m (above sea level) it isn’t very high but we have good view of the hill from the front of our house and the lowest point is the sea – we can see a glimpse of the sea from the back of our house.

Fact – apparently at one time there was a summerhouse / gazebo on top of the hill – hence the name!!

This is the view from the front of our house…. 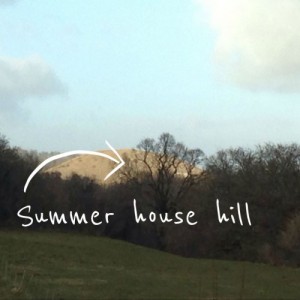 The weather today was slightly warmer than it has been – ranging between 6-8C and dry so we parked in Frogholt and walked up the hill. We found that if we sat just below the peak on the springy grass it was really pleasant as we were out of the wind – we ended up sitting there for about an hour – drinking hot Ribena / coffee, taking in the view and chatting. 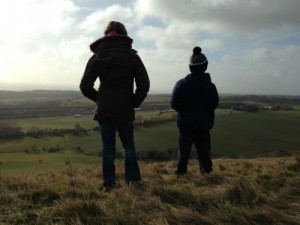 With the binoculars we could see our house and even make out Ian’s office! 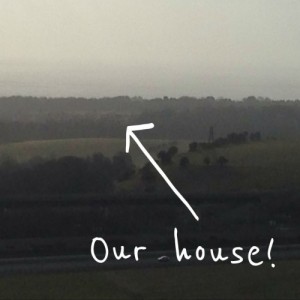 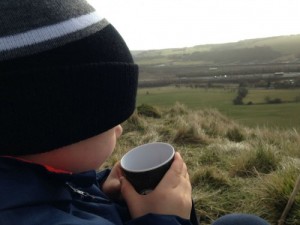 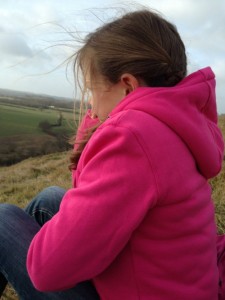 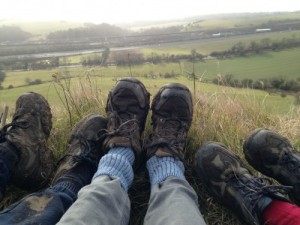 Now Harry had some homework to do today – Harry hates homework – so we thought we would choose the most interesting one from the homework grid – draw a sound map, a totally new experience for me. When charting a sound map you listen to the sounds around you and make a map! Easy! And we thought it would be much more exciting to do it on the hill. I am not sure what Harry’s teacher will make of his map, he wrote down the usual sounds – birds and traffic. But we could also hear a gun firing (a clay pigeon shoot at the bottom of the hill) and we chatted to some hitch hikers – so he put those on the map too!!! (A hill is not a good place to hitch hike from – so we recommended they walk to stop 24!) We also downloaded a really cool app called – Measures – which not only measures decibels but also seismology and more. We measured 60DB on average but no earth tremors unless Harry jumped up and down next to my phone – at which point I shouted and the decibel reading went up…… 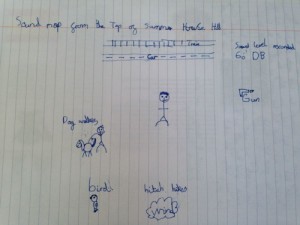 This was Abbie’s version of the map 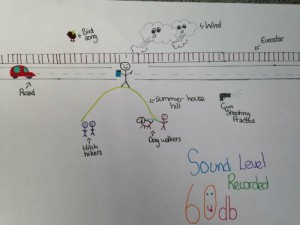 From summit to sea part 2! 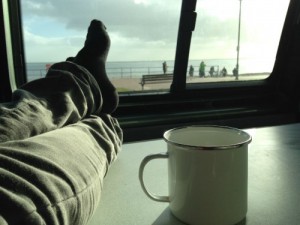